I’m writing this post because women’s rights are far from being in the bag and the abuse of women while pregnant, during birth and beyond is just disgraceful and far too common, the world over. This particular post is about how Ireland treats women while pregnant. It might not affect every woman, but if it affects even one, we should care enough to do something about it. Unfortunately too many women have been affected, so it’s really time to do something about it.

If the 8th amendment were repealed tomorrow, securing an abortion in Ireland would still be as difficult as it is now. The Protection of Life During Pregnancy Act 2013 would remain in force, untouched, regardless of what happens to the 8th. Many people seem to forget that, very conveniently in many cases. I believe it is a mistake to equate repealing the 8th amendment with abortion as abortion is such a contentious and emotive issue that divides people. And this may be exactly what the Irish state wants, so they can continue with their moral cowardice on the issue, hypocritically exporting the issue and women abroad, while keeping the fact that they hold the legal rights to the bodies of all pregnant women in Ireland, quiet. This is the case whether a woman wishes to continue with her pregnancy or not.

The 2013 Act is one of the strictest such laws in the world according to Eoin Daly, lecturer in constitutional law, NUIG. Therefore the fear that there will be abortion on demand if the 8th is repealed holds no weight whatsoever and is completely unfounded, because the 2013 Act would strictly prevent that. This fear is also an insult to the intelligence and sensitivity of women that if the 8th were repealed, they’d be having abortions right, left and centre.

What would happen if the 8th is repealed, is that the legal right to bodily autonomy would be restored to all pregnant women, which is not a step forward, it just brings us in line with most of the rest of the world and about time at that. The right to make our own medical decisions and informed consent and refusal would legally rest with the woman while pregnant. I don’t know how anyone could object to that. Do we honestly need to hold women legal prisoners of the Irish state while pregnant so they don’t ‘misbehave’?? Are we still in the dark ages in this country when it comes to women? It seems so. 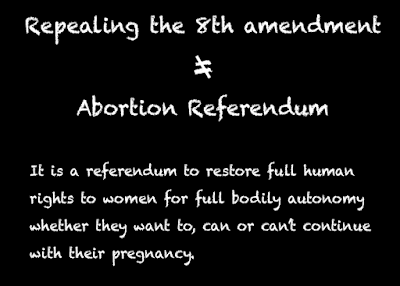 Ireland took 30 steps backwards when article 40.3.3 (the 8th amendment) was added to the constitution in 1983. Of course this addition was reflective of the culture in Ireland towards women at the time which was just 30 years ago. Magdalene Laundries were still in existence, pregnant girls were still being thrown out of their homes with nowhere to go, pregnant teachers who were single were losing their jobs, pregnant teenagers were still hiding their pregnancies because of fear and shame. But this is 2017 and where are we now in Ireland? Have we changed in our attitudes to women?

No, we haven’t, at least collectively. In fact the Irish state has taken even more steps backwards in relation to women’s rights. In 2013, the 8th amendment was added to the national ‘consent’ guidelines for pregnant women by the HSE. The relevant section states that:

“Section 7.7.1 Refusal of treatment in pregnancy
The consent of a pregnant woman is required for all health and social care interventions. However, because of the constitutional provisions on the right to life of the “unborn”, there is significant legal uncertainty regarding the extent of a pregnant woman's right to refuse treatment in circumstances in which the refusal would put the life of a viable foetus at serious risk. In such circumstances, legal advice should be sought as to whether an application to the High Court is necessary”.

Why, after 30 years, were the consent guidelines amended? In my view, it was a financial move to limit liability. The obstetric bill is the biggest in the state claims agency. After bailing out the banks, there’s not much money left in the coffers. There are too many women coming forward, standing up for themselves, speaking up, taking cases, fighting for their rights and the Irish state doesn’t like it one bit. What better way to shut them up than by explicitly mentioning the 8th and the high courts in the consent guidelines, even if it’s ‘just’ to scare them into silence and obedience. Bullying is endemic in Irish society, particularly in our institutions and government.

In 2014, Ciara Hamilton was told by a judge that she was not the person entitled, authorised or qualified to make decisions about her own body while pregnant, her midwife was. Can you believe that? In 2013 and 2016, two women were brought to the high court by the HSE who sought orders for forced sedation and forced caesareans. I don’t know about you, but the possibility that this can happen in a so-called modern and progressive country sends shivers up my spine.

Miss Y was given a “termination” after being raped in her home country and sought an abortion at 8 weeks because she was suicidal. She was pushed from pillar to post until she was 24 weeks pregnant and given this “termination” in the form of a caesarean. So she was abused and raped all over again by the Irish state. She wasn’t even afforded the status of being an incubator as I’m sure the actual machines get better care. Her baby was then taken into care. I am sure both were extremely traumatised by the ‘care' they received. Another woman who suffered a brain tumour, had numerous infections with her body failing, was kept on life support because her 15 week old baby still had a heartbeat, against her family’s wishes. And so the atrocities continue …

These are just some of the desperately sad cases that I know about. I’m sure there are many many more. Are there good individuals working in the HSE? Yes, there are. But we are talking about national policy here, not the random luck of the draw of getting a good health care provider. It should not come down to luck, respect should be guaranteed along with evidence based care and when it’s lacking there should be adequate, accountable and transparent procedures that can be accessed and properly and thoroughly followed through.
Posted by Noreen Barron at 7:29 PM No comments: Links to this post

We can’t talk ourselves into safety, we either feel safe or we don’t. There is no quick fix when it comes to feeling safe, it takes time to rewire our systems from being primarily in flight, fight or freeze; responses which are supposed to be temporary, not permanent. If the situation in which we find, or have found, ourself is chronically and repetitively threatening (very common in early developmental trauma which often leads to complex traumatic stress syndromes), these survival responses become essential, we don’t have the luxury of turning them off, they are needed for our very survival.  However, when they are employed long term they take a huge toll on our systems. Learning how to feel safe again is about being able to determine a real threat from a perceived or imagined threat. Both threats feel very real and have the same responses in our organism but usually only the real threat requires immediate action. When we internalise a threat, or threats, that’s trauma.

Somewhere along the line we started distancing ourselves from our instincts in order to appear more civilised, many humans forgot how to discharge the freeze response (tonic immobility), and as a result, these responses often become the enemy, or the threat. This is why saying that trauma is in the past is just not true. Traumatised people live with a present and current sense of internalised threat which can be excruciating as brain research shows.

Just like love might be our ultimate goal, so might safety. But there are stepping stones on the way to these bigger goals that can empower us and make us feel good on our journey. We don’t have to have 100% safety or love in order to feel ok. For example, when tapping you might ask yourself where in your body do you feel calm, grounded or neutral. What you’re looking for is to find a place that feels safe enough to go to if there are other sensations in your body that are too much for you right now leading to overwhelm and flooding. Peter Levine calls the movement of our attention from a place of overwhelm to one of neutrality or calm, or contraction and expansion, pendulation, and it is a really great resource to use at any time.

Even though I feel a lump in my throat, I also notice that my left knee feels quite calm and I’m going to move my attention back and forth between the two

Even though it feels better to let my attention rest on my knee for now, there’s a part of me feeling I must pay attention to my throat too, I completely accept how I feel

Even though there’s a part of me that feels I have to fix this feeling in my throat or make it go away, I’ll let my attention rest on my knee for now and see what happens

Even though I don’t feel safe (how do you know this, on a scale of 0 to 10 where are you?), there are places in my body that feel calm/grounded/neutral and this makes me feel …

Even though I don’t love myself right now, I can accept and even like some parts of me and that feels …

Posted by Noreen Barron at 7:17 PM No comments: Links to this post